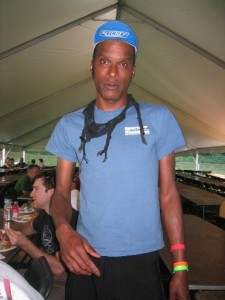 In AIDSLifecycle 2006, swiftly and effortlessly, I rode from San Francisco to Monterey (Southwest) and then to King City(Southeast) – 127 miles (22 miles more that required). And five miles before completing this particular day’s journey – I crashed.

At 4:30am, I woke up in the grid – tent plot “E47”. And although Chris was still sleeping, I continued as planned.

I rolled up my sleeping bag, packed my DeSoto Tri Bag, and proceeded to the Gear Truck ‘E’. Soon later, while sipping my morning coffee, I reflected on the previous day’s running of the bulls in Pamplona: And, I knew today, “it was time to become the tortoise – not the hare”

At 6:30am, I mounted my bike. And although AIDSLifeCycle consists of a motorcycle safety crew, a traffic crew, a vehicle sweep team (SAG Wagon), a UCSF Medical crew, and it’s own fleet of ambulances – with each mile, I had flashbacks of my last year’s misfortunes. And with no intentions of obtaining “road rash” or “traveling off course,” I found that “FEAR” was still sitting in my jersey pocket.

So, I remembered the Yoga Sutras – “there are three ways of controlling the mind:
1. Mantra Repetition
2. Gazing at a Fix Point (Internally or Externally).
3. Dwelling in the retention of the breath – using the exhalation to calm the mind.

And using a combination of the these three yogic tools, I cycled approximately 40 miles to lunch and then (passing up my past year’s route error) I arrived to the Otter Pop Stop. 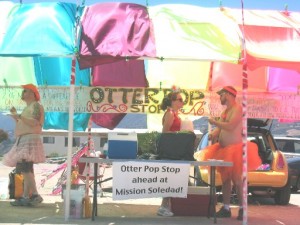 Upon arrival to the Otter Pop Stop, I realized the importance of an enthusiastic and vocal supporter. I realized that these volunteer crew people were put here to save me from “FEAR.” I understood that these people (if necessary) would empower me, hold me, distract me, assist me, and/or push me to the finish. And then, the fear of possible “road rash” vanished.

Later that day, arriving 1 hour & 15 minutes behind “the slacker” (shortening the gap between us), I completed the 105 mile route without injury or logistical errors.

After eating dinner, I spoke with an AIDS LifeCycle Staff Member.

I asked her, “what is your job during the AIDS Lifecycle Event?”
She replied. “I’m in charge of Safety.”
And, I told her – THANK YOU! 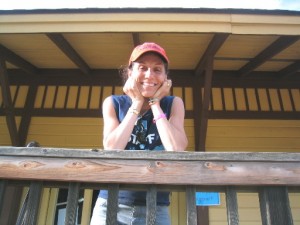 And another wonderful day it was …